skip to main | skip to sidebar

Starting now we have a 15 % price reduction on all licences!
Get your Christmas discount until December 25, 2010!

Tutorial 1 - Item Creation
This tutorial teaches you how to create a new item in the Project Editor and add it to a scene using the ItemCollector prefab.
Link

Tutorial 2 - Player/Event Interaction
This tutorial teaches you how to create a player prefab which can interact with events. It also covers how to set up a simple event to spawn your player in a scene.
Link

Tutorial 3 - Cinematic Dialogue Event
This tutorial teaches you how to create dialogue positions, camera positions and use them in a game event to create a cinematic dialogue event.
Link

I'm currently workin on ORK 1.0.2 - will have some new features and improvements, e.g. gizmo icons, some new character options to allow the creation of a mercenary system and items setting/removing game variables. Update will be released next week.

I'm happy to announce the release of the new version of ORK. All scripts are now available in JavaScript and C# versions - you'll get both on purchase!

There are also some new features, e.g. the ItemCollector, which allows easy placement and collection of items in scenes (handles displaying the item's prefab, adding the item to the inventory, displaying a dialogue which informs about the collected item and handles setting and checking game variables, etc.).

Read all changes in the changelog.

As the title states - ORK Okashi RPG Kit for Unity now officially supports publishing to the Web Player platform! This was the next big step after the release on November 7, 2010.

And we got the demo to prove it :D

I'm proud to announce - it is done!

Visit rpg-kit.com for details. You'll find a small overview of ORKs features, the complete (and massive) documentation and, naturally, the shop with informations on the licences and prices.

And don't forget to try the small demo RPG created with ORK - the Okashi RPG Kit for Unity:
http://www.rpg-kit.com

Be ready for the release this Sunday, November 7, 2010 ... including detailed documentation!
Just a small note on the prices - expect around 100 euros for a single indie developer licence, details on Sunday.

It took me longer than expected to finish the demo game (kids, trips, etc. :D) - but you can try it now!

Go to rpg-kit.com to download the standalone demo (for Windows or Mac).
This small RPG shows the key features of ORK (short for Okashi RPG Kit for Unity), including ingame events (dialogues, etc.), battle system (the demo uses the active time settings), etc. - even a simple camera system based on game events was implemented in the town area of the game.
Every gameplay aspect of the demo was created using ORK - so try it out and drop me a line!

The release of the actual RPG Kit will be this weekend - all I have to do is finish the documentation ... so many pages to write :D

The development of the base RPG Kit for Unity has already been completed. I'm currently busy setting up a demo game created with the kit and writing the documentation.

The kit is officially named ORK, short for Okashi RPG Kit ... since my company is named Okashi Itsumo :D
I was really happy to see that http://rpg-kit.com was still available, so you'll find the information about the kit, the demo game and the documentation stuff there ... once it's done.

The release will be this weekend - maybe Saturday, maybe Sunday ... as soon as its done!

10/26/2010
Sorry, I have to delay the release again - there are just too many features that need to be explained and documented. New release date is Monday next week, but I'll make the demo game available as soon as it is finished!
10/29/10
Kinda ran out of time; going on a short trip this weekend, so the demo is delayed till next week, hope I get everything done till Monday ...
Written by ani-kun 3 Comments

I've been hard working on the RPG Kit for Unity, so I kinda had no time to post about it …

But the good news is: it's nearly done! I'm currently implementing the last (small) things – afterwards documentation and example projects.
The base kit now contains far more features than I had originally planned, but will still lack some things like a shop editor or a menu editor. Those things will come before the end of the year (or you can code them yourself if you want to – the documentation will contain how to access the needed information).

Nevertheless the RPG Kit for Unity is feature packed:

I think that's pretty much everything that will be in the base kit – of course it will come with ready to use prefabs where possible.
The release will be in 1-2 weeks – maybe already this weekend (October 15 or 16), but I can't guarantee it, since there is a lot of stuff to document.

So, that's it for now – I'll be back once it's done :D
Oh, and follow me on twitter, if you want current development infos!

For now the Battle System Editor is finished (animation and particle effect implementations will follow shortly) – and I'm working on a release of the RPG Kit in September (end). This release won't have the full features I was aiming at, but the rest will follow when it's done.

September's release will include:

I'll work hard on finishing this release of the RPG kit as soon as possible – so stay tuned!

While the work on the battle system part of the RPG kit improves, I want to give you an understanding of one of the key features of the kit:

The power of formulas
Formulas are used to calculate hit chances of skills, weapons or enemies, skill damage, the effect of items (e.g. on status values) or to determine the order of actions in the battle system, escape chances, counter attack chances, etc.

As you can see, formulas are used in nearly every major aspect of an RPG. Normally you would have to code your formulas yourself whenever you need it …
But in the RPG kit for Unity, formulas can be done much easier – you simply put them together in the Project Editor and then use them whenever you need it. 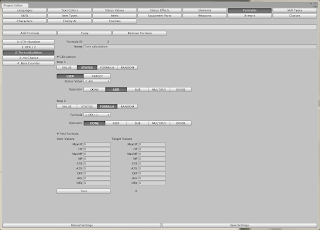 Formulas are organized in steps, every step has a value and an operator (add, sub, multiply, divide and done – this finishes the calculation). The value can be:

The operator determines how the next step should interact with the current value of the formula. By using formulas within a formula it is very easy to create complex calculations. To see if your formula works the way you want, you can test it right away – just define the status values for user and target and click the test button.

That's it for now, stay tuned …

I'll begin with some general details. The RPG kit consists of several Editor Windows and Components.
The Editors are used to set up your RPG project elements, create events (e.g. dialogues) and all the other stuff you need in an RPG (shops, menus, etc.). The Components are used to bring your settings (e.g. items, dialogues, shops, etc.) into your game – click here to learn more about Unity's Component system.
The RPG kit saves all data in XML format, but you don't have to worry about that, since you'll never have to touch this part.

The following Editors will be included in the RPG kit:

There'll most likely be some changes in the development process – like integrating an Editor into another.

Project Editor
The Project Editor is the main tool of the RPG kit for Unity. It is used to set up all of your RPG projects settings and data:

Like I said in the last post – the RPG kit should be flexible, and flexible it is! Let me give you a small example:
For your gameplay idea you need two different health status values and like three different values to be used when casting skills … No problem – configure them in the Status Value tab of the Project Editor and use them in skills and formulas, let equipment give them bonuses or items increase/refresh their values, or manipulate them with a status effect. 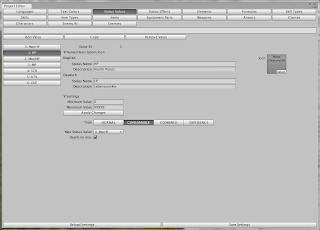 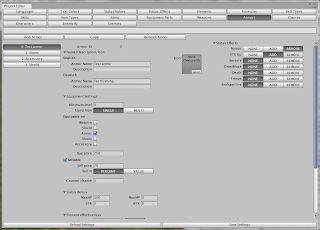 
That's how it works. Define the stuff you need and use them where you need it. I'll get back to the details of the Project Editor in the next posts …

Battle System Editor
This Editor will most likely be integrated into the Project Editor, but since it's in development right now, I'll handle it as a standalone editor (and stay short on details).
For now, the Battle System Editor allows you to create turn based or active time battle systems and will be extended by a real time system in the future. Besides that, you can use formulas to determine the order of actions (when every battle participant can make its move), choose which information you want to be shown on the screen and where (e.g. health bar) and set up the menu for battle commands.

Since this is the first post, I'll write some words about the intentions behind this blog.

First of all, this blog is about game development … Independent game development, to be precise. I'm doing practically all of the development stuff on my own (everything but sound effects), so there will be more than enough topics I'm going to talk about. I guess I'll rather focus on the design part than on pure coding – such as game, level, character and gameplay design, composing and selecting the right music for the right scene, etc.
Stuff like that, yeah.
Oh, and of course: how the fuck can I turn all my thoughts and ideas into a working game? That's the key question, isn't it?

I've been an indie game developer for almost three years now, released two (smaller) games and currently I'm working on a more complex/bigger game – a RPG. This brings me to another reason for writing this blog – marketing.
I don't know how you feel about marketing, but I hate it. Well, it has to be done, so why not combine it with something fun, like talking about the stuff I do?

But let's get back to the fun stuff. My current project is being developed with Unity, a pretty awesome game development tool (visit their website to learn more about it).
Like you all know, RPG's are very complex and have a lot of things to be thought about – items, enemies, equipment, skills, etc. – and everything has to work together, somehow.
While working on the base game mechanics for my new RPG, I spent a lot of time thinking about how to create a good, reusable system, which will also work in future projects with other gameplay elements and needs.

To allow other developers to use it in their own projects, I came up with the idea of developing a RPG kit for Unity. This RPG kit should be flexible (e.g. allow the definition of your own status values), support the definition of multiple languages (e.g. different item names per language) and allow all settings to be made through a "simple" editor.

Worked out pretty well till now – one-third of the RPG kit is already finished, details and screenshots will follow in the next post(s).